Mushroom season 2013 is certainly just around the corner, and may well have already started. The last week has seen a marked increase in the number and variety of pictures being posted on the internet, especially of all sorts of boletes (mushrooms with pores rather than gills). 2012 was a bad year for boletes, so we’re due a good one. I have not been out mushrooming in the south east for the last three weeks, so I can’t provide any first-hand evidence of what is fruiting down here, but I can categorically state that the mushroom season has already started in Scotland.

I’ve just returned from a week in the far north of the UK, most of which was spent walking, in search of fungi. There were plenty of boletes around – a wide selection from three of the four major genera (boletus, suillus and xerocomus). I saw only a single leccinum – a (very common) brown birch bolete (L. scabrum). I found several mass-fruitings of chanterelles, blushers (Amanita rubescens) in multiple locations and lots of fly agarics (A. muscaria) in one location. Other edible species included deceivers, oyster mushrooms, fairy ring mushrooms, russulas and loads of field mushrooms. This is all stuff that can be found all over the UK, but my primary reason for spending some time north of the border was to locate and photograph some things that I would rarely or never find down here in the south. Three of these are worthy of mention: 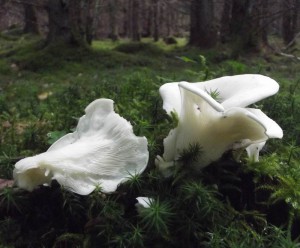 Sounds lovely, doesn’t it? Both the common and latin names seem to suggest this one must be good to eat. It’s also a rather pretty fungus, looking a lot like a pure white version of oyster mushrooms. Indeed I have seen somebody in the UK post a picture of them and confidently identify them as “Oyster Mushrooms: edible!” It is in fact unrelated to the pleurotus species, belonging instead to the Marasmiaceae family, the only well-known member of which is the fairy ring mushroom (Marasmius oreades). You will also find no shortage of recipes on the internet, for this is a traditionally eaten species. I did not eat it. I had actually intended to try a little bit, but they turned up when I was en-route to somewhere I found loads of other things, and I somehow managed to lose track of them.

You may well have guessed by now that there is a question-mark over their edibility. If so then you’re right, and it’s a big one: in 2004, fifty-nine people in Japan were poisoned by this species, seventeen of whom died. The cause of death, frighteningly, was acute encephalopathy: they died of massive brain lesions in the cerebral cortex. Doesn’t sound so appealing now, does it! These deaths were more than a little mysterious. Why did it suddenly happen in 2004, and not before or since? What is the connection with kidney function, since all of the fatalities involved people who had pre-existing kidney problems? We now have at least some of these answers, and they are explained in full here. The short version is that these mushrooms contain a very high level of an amino acid precursor called pleurocybellaziridine, which, when ingested, reacts with various other chemicals in the body to produce six amino acids that do not usually occur in humans. For reasons that are still unclear, when persons who have inefficient kidneys eat a large quantity of this species, a significant amount of pleurocybellaziridine reaches their brain, where it reacts with other chemicals producing these novel amino acids which in turn cause the fatal brain injuries. The reason this all happened in 2004 was that that was a particularly good year for this species in Japan – a large amount of it was available, and the fruiting bodies were also very large, so a lot of it was consumed.

Eating small quantities of this fungus is highly unlikely to be dangerous, but given that not everybody who has a kidney problem knows they have a kidney problem and that we do not have sufficient information to predict when the next outbreak of of pleurocybella poisoning will occur, or where, then I think the advice has got to be to steer clear of them.

P. porrigens is common in the Scottish Highlands, becoming increasingly rare the further south you go, currently not occuring in the south of England at all (although it appears to be spreading southwards). 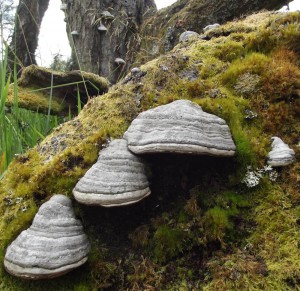 This one is not edible, because it is rock hard. I’ve only ever seen it once before, and that was the previous time I visited Scotland in search of fungi. On that occasion I found only one fruiting body, which I kept as a memento of that holiday. I still have it, twenty years later.

This time I found them plastered all over a large, dead tree. The species is both parasitic and saprobic – it will kill a weak tree and then continue to feed on its corpse. It has two common names. The first derives from its shape – it’s quite obviously hoof-like. The second derives from its use, and indicates why it is of interest from more than a purely mycological or aesthetic angle: tinder fungus. The fungus has to be processed (soaked in water, then beaten and stretched to separate the fibres) in order to produce a substance called “amadou”, which in addition to being used as tinder has also been used to produce clothing, to stop bleeding and is still used in fly fishing to dry the flies.

F. fomentarius does occur throughout the UK, but is much more common in the north. 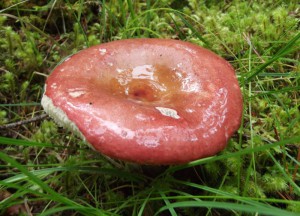 This has to be my favourite find of the last few days. Russula is such a tricky genus that I’m always pleased when I manage to identify a new one, especially if it turns out to be edible. I do not use microscopy or chemicals, which means that I’m often unable to work out which species of russula I have found. Some of them have some sort of distinctive feature that renders them more easily identifiable, but it is usually only if I find quite a lot of them and spend quite a bit of time narrowing down the possibilities that I stand any chance of figuring it out. A comprehensive guide book is essential (preferably more than one), and you must note the colour, the habitat, the nearby trees, the smell, the taste of the gills (both immediately and after a while) and also how far the cap cuticle peels from the edge to the middle. In this case it was possible, by a process of elimination, to work out that the purple russula I’d found was an edible species that is just about restricted to the highlands. There were plenty in the area of woodland I found them in though, so I took a few for the pot, and was not disappointed. It is also common (and a prized edible) in Scandinavia. NB: there are two very similar species – bright red rather than purple-red like these – that will give you a very nasty stomach ache!

I am planning on making another trip to Scotland next August. For me, mushroom season just got longer.