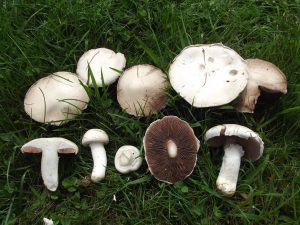 This familiarity might lead one to think that Agaricus are a relatively easy genus for foragers, but that would be serious mistake, because Agaricus is hard. Even the two really well-known edible wild species – the field mushroom and horse mushroom (Agaricus arvensis) – can’t be classified as “easy”, for the simple reason that in most cases of death cap (Amanita phalloides) poisoning in the UK, the person who made the mistake believed they were picking one of these two agaricuses. Admittedly field mushrooms grow in fields and death caps grow in woodland, but sometimes people forget this and sometimes fields are right next to woodland. In the case of horse mushrooms the danger is more acute, because horse mushrooms will grow in woodland a happily as they grow in grass, and a small horse mushroom is superficially very similar indeed to a death cap. 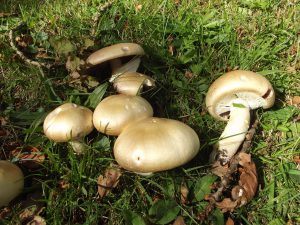 The problems don’t stop there either. Even if you manage to get the genus right, and avoid the deadly amanitas, the mushroom responsible for the largest number of poisonings in the UK is another Agaricus – the yellow stainer (Agaricus xanthodermus.) This and the other phenol-tainted agaricuses may not kill you, but they’ll probably make you quite ill if you’re silly enough to eat them even though they made your kitchen smell horrible when you were cooking them.

So you’ve got the genus right and you know about the yellow stainer and its close relatives. The rest of them are pretty easy, right? Wrong. You’re not going to come to any major harm eating them, but trying to work out exactly which one you’ve got is often impossible without microscopy, and quite a few of the more obscure members of the genus cannot be eaten because they taste foul (e.g. Agaricus bernardii, which is a salt-loving coastal species commonly found by roads that were salted in the winter…and tastes like salty roadwater), because they give you really bad wind and other gastric symptoms.

Having said all that there are, of course, quite a few choice edibles in this genus. The Prince (Agaricus augustus) probably wins the prize both for the prettiest member of the genus, and the tastiest. 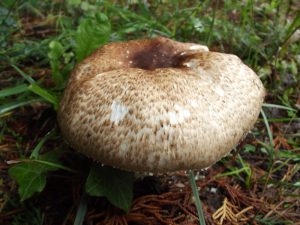 The Princess (Agaricus lanipes) is the only mushroom that Roger Phillips ranked as “edible – delicious” in his Mushroom Bible. But I think my favourite edible Agaricus has to be the mushroom which turns up in the most unlikely of places you’d ever expect to find a fungus, let alone a choice edible – the pavement mushroom (Agaricus bitorqis), which happily smashes its way through asphalt or breaks open paving slabs in order to appear in the middle of a pavement or in the gutter by the side of the road.