I was contacted last night by a person (let’s call him “Dave”) who has had a bad experience with a fungus, and he has given me permission to blog about his story and use his photos. The story is worth telling firstly because of the unusual reasoning that led to the poisoning, and secondly because the fungus in question is very rarely consumed and the information about its toxicity is conflicting.

Dave has a copy of my book. Last week he found a fungus growing in an unusual location – it was emerging through an asphalt pavement by the side of a wall. He then…

…tried to identify it from Geoff’s book but couldn’t find anything that looked like a close match though it seemed to look more like a truffle rather than anything else – though we realised that would have been pretty unlikely. However, since we couldn’t find anything like it in the “poisonous” pages we thought we would take a chance. Bad decision!

The overwhelming majority of fungi poisonings are the result of a positive misidentification — for whatever reason, people think they are eating edible fungus X and in fact it is poisonous fungus Y. Most people abide by the rule “If in doubt, leave it out.”  It is very unusual for a person to eat a fungus simply because they’ve failed to positively identify it as poisonous, knowing perfectly well that they don’t know what they are about to eat. 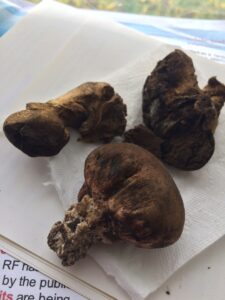 The fungus in question looks a bit like an old puffball (these are edible while still white, becoming poisonous as the spores start to mature to brown). In fact it is an Earthball. Not a Common Earthball (Scleroderma citrinum), which is in my book. It is not big or tough enough. I believe it to be a Scaly Earthball (S. verrucosum), though I am open to being corrected on that if anybody reading this thinks otherwise (I did wonder for a while whether it might be the very rare Dyeball (Pisolithus arrhizus), which I’ve never seen and is known to grow through tarmac, but its internal structure (the “gleba”) looks wrong. It is certainly a member of the Sclerodermataceae, all of which should be considered toxic. It seems this one might be quite seriously so, since not very much was consumed and the symptoms were rather unpleasant. There is no reason for me to edit Dave’s account:

There were about three growths there, in various stages of maturity. We picked one of the smaller ones and took it home with the aim of trying to identify it. Despite consulting a couple of reference books (including yours) we were unable to come to a conclusion what it was. It actually resembled a truffle more than anything else, though we were aware that it was most unlikely to be one of those. We were also aware that earthballs were inedible, but this thing didn’t look like the standard picture of an earthball, which apparently are generally pale on the outside and black on the inside. This thing was quite the opposite: brown on the outside and pale on the inside. In addition, it had an irregular, somewhat knobbly shape, unlike the smooth dome-shaped earthballs we saw in the pictures. So we didn’t suspect that this was what it might be. SO we thought we would try it. We shared just one small fungus between us with our evening meal – and as things turned out it was indeed fortunate that we did not eat more of it. 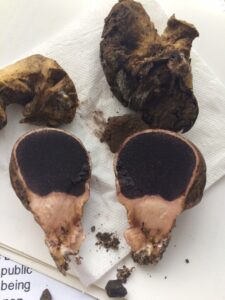 When fried and eaten it tasted quite pleasant, and for some time we had no reason to suspect anything untoward. When we went to bed about three hours later the first sign of anything unusual was that we both suddenly developed blocked noses. We thought initially only that we must have picked up a cold from somewhere, although it was odd that it came on so suddenly and for both of us at the same time, It was a couple of hours after that that I felt there unstable in my stomach and thought I had better make my way to the bathroom. Having done so, I suddenly felt a terrific blow on my forehead that seemed to come from nowhere, and then realised that I was on the floor. The odd – and rather frightening – part about it, is that I had no sensation of feeling dizzy or unsteady on my feet, or even of falling. One moment i was on my feet, and the next thing I knew was this mighty whack on the head and me wondering how and why I came to be on the floor. My wife then came into the bathroom, attracted by the noise of what she describes as a terrific crash. It turned out I had fallen against the radiator and gashed my forehead on it, which would account for the noise. In fact it was lucky in a way that the radiator broke my fall, since if I had simply fallen flat on the floor I might well have broken my nose and/or several teeth.

My wife at that point began to feel unsteady on her feet and decided she had better sit down on the floor next to me – she evidently had the benefit of a prior warning, which I had not! We both then found ourselves wanting to vomit. My wife did bring up a small amount of brown liquid, though nothing like the amount of food we had eaten at supper. For myself, I retched a few times but did not bring up anything at all. After that we crawled back into bed, and noticed immediately that both our blocked noses were now clear again – suggesting that this effect had also evidently been a symptom of the fungus poisoning as well.

We managed to get to sleep. In the morning we lay in bed for a long time feeling unenthusiastic about getting up. When we did so we were still rather light in the head and queazy in the stomach, but these symptoms wore off during the morning and by lunchtime we felt well enough to eat a proper meal. Later we went back to the spot where we found the fungus and collected the other samples that were growing there. These were the ones we photographed and sent the photos to you. As you saw, although the outside surfaces were dark brown, and the shapes irregular, the larger one when cut open showed on the inside the classic earthball appearance. If the small one we collected the first time had looked like that, we would have known better!